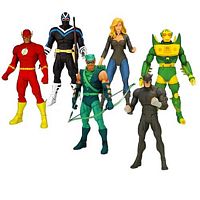 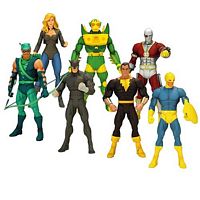 Granted powers by the wizard "SHAZAM!," Teth-Adam was magically transformed into the super-being Black Adam whenever he uttered the wizard’s name. After being corrupted by his power, the wizard stripped Adam of his magic and placed the abilities in a scarab amulet. Finding the amulet, Theo Adam used its power to murder his associates, the parents of Billy and Mary Batson. In an act of reform, he joined the Justice Society of America, however, he uses the power of "SHAZAM!" to whatever end he sees fit, be it good or evil.

Dinah Lance is the daughter of Private Investigator Larry Lance and the original Black Canary. A sultry Judo expert and member of the Justice Society of America. Prior to her mother’s death, Dinah took up the role of Black Canary and carried on in her stead. Dinah’s crime fighting career is aided by her natural super powered "Canary Cry."

To escape the memories of a family altercation that left his father paralyzed and his brother dead, Floyd Lawton moved to Gotham City where he began his career as a criminal. In the process he trained himself to become a highly skilled marksman and he adopted the name Deadshot. During one of his many stays in prison, Lawton was offered amnesty for past offenses if he would accept a potentially fatal mission on the behalf of the U.S. Government as a member of the Suicide Squad. Since then, Lawton has worked both on his own as a criminal, and occasionally as a member of the squad. 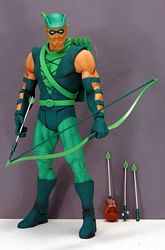 After falling overboard during a South Seas cruise, Oliver Queen washed up on a desolate island. Facing starvation, Queen fashioned a bow and arrows to hunt game and became an ace archer. After his rescue, Queen attended a costume party in Robin Hood regalia and foiled a robbery using his hard-won archery skills. Thrilled by the experience, Queen decided to continue fighting for the innocent and downtrodden as the Emerald Archer known as Green Arrow.

Jim Harper was an ordinary rookie cop when he donned a costume, took up a shield, and became the crime-fighter known as the Guardian. He soon found himself battling alongside other costumed crime-fighters against larger-scale menaces. But he took on his greatest responsibility when he became the leader of the youths known as the Newsboy Legion. They helped him fight injustice, and he helped them finish their homework.

(*A label was added to the package which read: First time ever in 6 inch.) 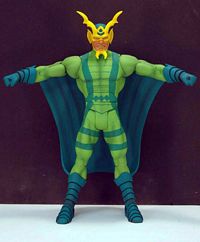 Mantis is a servant of Darkseid, ruler of Apokolips, the planet of ultimate evil, and his power may rival that of his master. When Darkseid sent Mantis to Earth to locate the Anti-Life Equation, the means to control all sentient life throughout the universe, Mantis schemed to conquer the planet himself instead. Cursed with an insatiable lust for power, Mantis would be just as happy to see Darkseid defeated as he would to see Apokolips triumph. 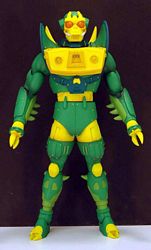 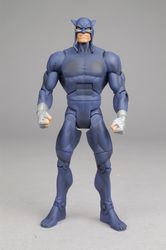 Ted Grant was a heavyweight boxing champion in the 1930’s. He became a fugitive when mobsters framed him for murder in the ring. Ted donned a black costume and adopting the name Wildcat, used his combat skills to beat a confession out of the men who framed him. Wildcat decided to remain in costume and focused his attention on mob-related crime. In his civilian identity, Ted Grant has operated a gym and trained Batman, Black Canary and Catwoman in hand-to-hand combat arts.

Ted Grant was a heavyweight boxing champion in the 1930’s. He became a fugitive when mobsters framed him for murder in the ring. Ted donned a black costume and adopting the name Wildcat, used his combat skills to beat a confession out of the men who framed him. Wildcat decided to remain in costume and focused his attention on mob-related crime. In his civilian identity, Ted Grant has operated a gym and trained Batman, Black Canary and Catwoman in hand-to-hand combat arts. 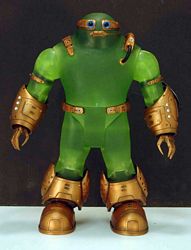 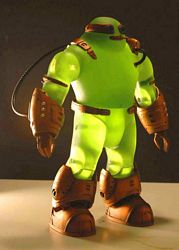 Chemo was originally a huge plastic vessel, 25 feet tall and roughly man-shaped, built by eccentric scientist Ramsey Norton to contain the chemical by-products from his failed experiments to better motivate him to eventual success. The scientist meets with failure after failure in his experiments, but presses forward, and Chemo becomes filled with greater and greater quantities of various chemicals.

After attempting to create a growth formula that will enlarge plants to help feed starving nations, the scientist again is unsuccessful and pours the remnants of his project into Chemo, finally filling the massive vessel. These chemicals cause a massive reaction that results in Chemo coming to life and growing into a building-sized giant. Chemo proceeds to poison the scientist with a lethal dose of the growth-formula chemicals, and then goes on a rampage, only to be defeated by the robotic Metal Men.