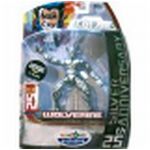 Twenty-five years ago, Wolverine was immortalized when he appeared for the first time in his own limited edition solo comic. Since then, Wolverine has become one of the most popular and widely recognized super heroes on the planet. Celebrate 25 years of the launch of this legendary hero.

Limited to 25,000 pieces.
Note: This was a re-release of the Toy Biz Marvel Legends Series Six Wolverine re-painted in silver.
(*I don’t have this one.)