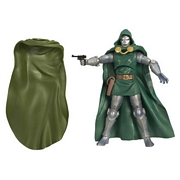 Obsessed with the conquest of Earth, Doctor Doom once laid his plans from a solitary castle hidden deep within the mountains of Eastern Europe. Early on in his career as a would-be conqueror, he identified the Fantastic Four as the chief obstacle to his ultimate (and inevitable) victory. Yet despite his obvious superiority to the quartet of Super Heroes, he has failed at every turn, often due to the incompetence of his allies and underlings. Now, he broods in his palace at the heart of his homeland, ruminating on the triumph that will one day surely be his. Certainly, should he ever again emerge to threaten the sovereignty of the petty nations of mankind, all of Earth’s heroes would stand against him, but they will break like waves against the might of Doom! 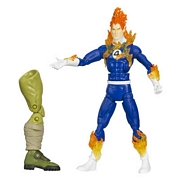 To say that Johnny Storm was a brat when he first got his powers would be a bit of an understatement. Hot tempered and often petulant, he took every opportunity to provoke Ben, and often flew off on his own after being scolded by Sue or Reed. He’s grown over the years into a good man, with a keen sense of responsibility and a healthy respect for the power he wields. Capable of emitting a burst of flame intense enough to level entire city blocks, he is constantly aware of himself and his surroundings when using his powers. Even so, his maturity has not completely obscured his wild streak, and he is the public face of the Fantastic Four – possibly the first true celebrity super hero. He is perhaps more often seen pulling up to a gala social event in one of his custom roadsters than he is battling crime. 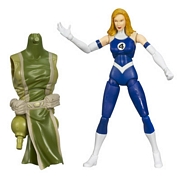 When Sue Storm first found herself fading from view, she wondered if she would ever again reappear. It took her almost no time at all, however, to adjust to her newfound abilities. As the Invisible Girl, she was content to serve as a spy for the Fantastic Four, sneaking in to snatch crucial items from their enemies. Over the years, however, she has become the Invisible Woman, mother and protector of the entire group, and her power has increased proportionally. Where once she could only turn invisible and fade into the shadows cast by the Thing and Mr. Fantastic, she is now one of the most powerful superheroes in the world with might limited only by the strength of her considerable will. 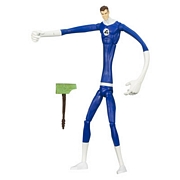 If Reed Richards isn’t the smartest man on the planet, he’s at least in the top five. We’ll probably never know for sure since even he hasn’t been able to come up with a means for testing exactly how smart he is. His intelligence is enhanced by an imagination that is second to none, and a mental flexibility that allows him to see his way around problems that to others are insurmountable. As with the other members of the Fantastic Four, this mental quality is reflected in his powers. His body is unlike any substance known to human science, able to stretch inconceivable distances without harm. He flexes his body into shapes limited only by his imagination, flattening out to the thickness of a single molecule to slip through minuscule cracks, or ballooning out into a massive crash pad to save others from a dangerous fall. 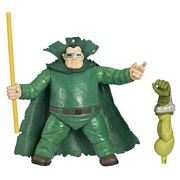 Harvey Elder was born nearly a century ago. His earliest memories are of his mother and father turning away from him in disgust. On the surface, he was an ugly little man whose intellect was ignored because of his appearance. When he went underground, however, he became a king. Battling creatures far more ancient and powerful than himself, he became one of the mightiest rulers of Subterranea, as well as the first and perhaps most dangerous enemy of the Fantastic Four. Commanding nightmare creatures from the depths of the Earth, he plotted the destruction of entire cities, the reorganization of Earth’s continents, and the conquest or destruction of the entire surface world. Despite his age and size, he is a formidable combatant, with an army of Moloids at his command and a list of super powers that render him deceptively dangerous. 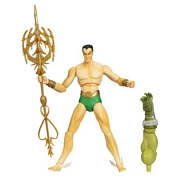 Short tempered, arrogant and often outright hostile towards the surface world, Namor is nonetheless a wise king and powerful champion of his native Atlantis. He lived for many years among the inhabitants of the surface world, and is himself the son of a land-dweller. Despite his experience with the world above, he remains disdainful of the weak, short-lived cousins to his people that crowd the continents above and pollute the seas and sky. He has rushed to the defense of Earth and his comrades (few are those he would call friends) in the super hero community in the past, but he always serves the interests of Atlantis first. He has alternately warred against and lived in peace with the surface world, and remains an uncertain factor in world politics. 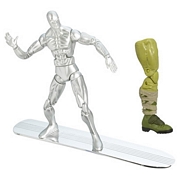 The first time the Silver Surfer appeared in Earth’s skies, it was as a thrall of Galactus, a world-devouring entity as old as the universe itself. He brought with him chaos, and the promise of destruction. It was only when he was reminded of his own world, long lost in the depths of space that he rebelled against his master. Cut off from the purpose he knew for so long, he took to wandering the space lanes, intervening where he could to see that right was done, trying to atone for the countless worlds he had helped to destroy. As the first and most favored among the Heralds of Galactus, he is a living battery of the Power Cosmic, one of the foundational energies of the cosmos, and as such, his power is nearly limitless. 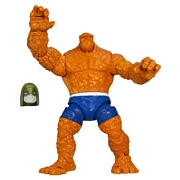 It was more than an overdose of cosmic radiation that turned adventurer and pilot Benjamin Grimm into the monster known as the Thing. On the day he piloted the fateful spaceship flight that ended with his mutation, he was twisted up inside with fear, anger and jealousy. After the crash, every bit of ugliness he held inside came boiling to the surface, turning his skin into the scaly, rock-like hide that has come to be famous the world over. Since then, he’s turned his hideous metamorphosis into an asset, using his strength and resistance to damage and overcome some of the greatest threats the world has ever faced. As he has become ever more the hero, letting go of his anger, his appearance too has changed. Now, when the world looks upon the Thing, they do not see a monster – they see a savior.