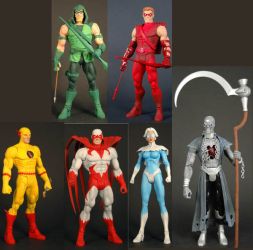 Dawn Granger was given powers by the Lords of Order, effectively stripping them from Don Hall (the original Dove). Needing the “Hawk” to balance her new role as “Dove,” Granger joined forces with Hank Hall. Lured to Druspa Tau, they were forced to battle each other in a war between the Lords of Chaos and the Lords of Order and their devotees. At the conclusion, Hawk and Dove absorbed the powers of their creators; leaving Dove with a new ability: flight. 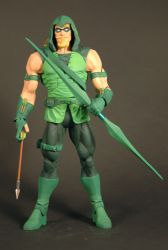 Oliver Queen was an irresponsible thrill-seeker until his time on a desert island forced him to master the bow and arrow. Forever changed, he became the masked vigilante Green Arrow. Over time, Queen became disillusioned with “justice” and secretly hunted down villains, including the man who blew up Star City – Prometheus. Queen was banned from Star City; however, the events of the Blackest Night and Brightest Day brought him back, struggling to protect what remained of his hometown.

The Yin and Yang of the Super Hero world, Hank and Don Hall were complete opposites, working together as powerful vigilante champions for justice. Opinionated and reactionary, Hank always butted heads with his reasonable, yet indecisive, brother. The Lords of Chaos bestowed upon Hank powers that came about when he uttered the word, “Hawk,” and his brother was imbued with the same powers from the Lords of Order. Working together, “Hawk” and “Dove” balanced each other out and battled evil. 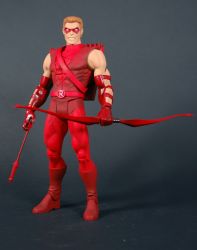 After the death of Roy Harper’s father, Brave Bow, a Navajo Medicine Man, took the boy under his wing, teaching him how to be a master archer. When Brave Bow died, Harper became Green Arrow’s ward and sidekick “Speedy,” going on many adventures with the Emerald Archer until they had a falling out. Harper joined forces with the Teen Titans, The Outsiders, and the Justice League of America, where he was given the name Red Arrow. 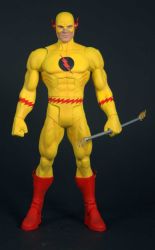 Born in the 25th century, Eobard Thawne was a fan of the Flash and wanted more than anything to be like the object of his obsession. He went so far as to transform his own face into Barry Allen’s likeness and recreated the bath of supercharged fluids, giving Thawne the same powers. Thawne traveled back in time to meet Barry, but the travel made him mentally unstable and he became a supervillain bent on the destruction of his former idol.

Sinestro was chosen to patrol Space Sector 1417 as its Green Lantern, but instead he ruled Korugar with an emerald fist. Eventually, the Korugarians freed themselves and exposed Sinestro’s abuse of power. The Guardians of the Universe stripped Sinestro of his mantle and power ring, subsequently banishing him to the Anti-matter Universe of Qward. Armed with a yellow power ring and allied with the Qwardians, Sinestro started his own army known as the Sinestro Corps! 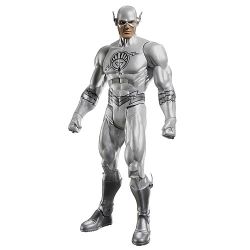 As Barry Allen went about his business in the Police Crime Lab, an electrical storm broke over Central City. Soon the lab exploded with a blinding bolt of lightning, bathing Barry in the supercharged fluids. This random combination of chemicals turned Barry into The Fastest Man Alive! During the events of the Blackest Night, Allen was temporarily transformed into a White Lantern and courageously joined Hal Jordan in the fight against Nekron. 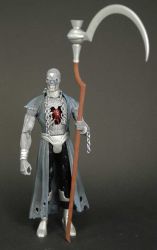 Nekron is a fictional embodiment of Death and ruler of a region adjoining Hell that also seems to border on Limbo and Purgatory within the DC Universe. It is where the souls of the dead await passage to their final residence in either the Silver City or Hell. Nekron draws his power from the souls and spirits of all those who have ever died.

After the Oan scientist Krona was converted into pure energy, that energy somehow reached Nekron’s realm; a rift opens between the dimensions due to the paradox of an immortal now being in the Realm of the Dead. Desiring the living world he is now able to see, but being too large to pass through the rift, Nekron recreates Krona as an undead being of enormous power instead. Given an army of similarly-restored spirits, Nekron sends Krona to kill the Guardians of the Universe in order to increase the size of the rift. Krona cooperates because part of Nekron’s plan involves collapsing the universe so as to recreate it according to his own desires (which would give Krona the chance to see a universe being born). Krona and his minions kill several Guardians and Green Lanterns while destroying the Central Power Battery to prevent the Lanterns from recharging their power rings. Although his attack is powerful enough to shatter the morale of the Green Lantern Corps, Hal Jordan manages to inspire and rally his fellow Lanterns into attacking Krona with the charge still left in their rings. Nekron is defeated when Jordan enters the realm of the dead and incites the spirits of the recently-killed Lanterns to rebel against him. This gives the Guardians enough time to banish Krona into the dead realm and close the rift with Jordan still trapped inside. The spirit of Jordan’s predecessor, Abin Sur, helps him escape the realm.

Accessories: Note: *Nekron did not come with the Scythe/Staff as pictured in the promotional images!