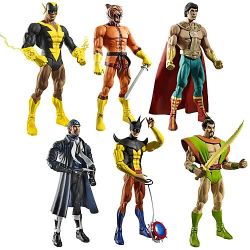 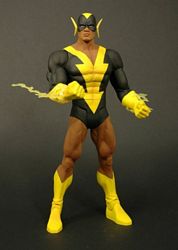 A devoted member of the Super Friends, Black Vulcan’s courage and character are undeniable. Although he keeps his identity and personal life to himself, he is trusted implicitly by his teammates. Some speculate that he might be a scientist – especially since he has used his powers to spot-weld microelectronic circuits – but not even Batman feels the need to investigate him. 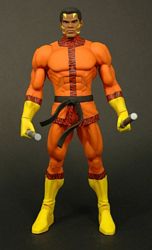 Ben Turner sought to tame the wildness within himself by mastering martial arts. Brainwashed by the evil League of Assassins, he donned a tiger mask and became the infamous Bronze tiger. Turner was eventually deprogrammed by Amanda Waller and joined the Suicide Squad, often defying orders and rescuing teammates deemed “expendable” by Waller. He is a noble man working alongside murderers, forever haunted by his past misdeeds. 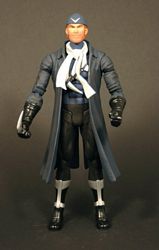 Digger Harkness was a poor Australian boy skilled at throwing a boomerang. When he tried to make a living demonstrating his skills, he was laughed at by audiences. Resentful and desperate, he turned to crime, calling himself Captain Boomerang. He became an archenemy of the Flash and joined the supervillain groups The Rogues and Suicide Squad. One taste of his razor-edged or exploding boomerangs, and no one is laughing anymore. 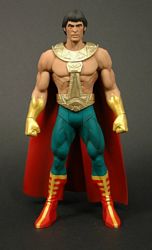 Dressed in a costume that evokes the Aztec kings of long ago, El Dorado uses his mystical powers to aid the Super friends in their worldwide quest for justice. Some speculate he is the descendant of Aztec sorcerers, empowered by their ancient magic and his people’s warrior-spirit. El Dorado has never revealed the source of his power, but his knowledge of ancient ruins in Mexico suggests a connection to the Aztec civilization. 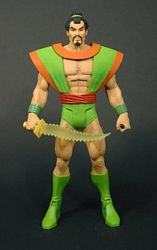 Granted superhuman powers by the New Gods on New Genesis, history professor Toshio Eto vowed to use his new powers for good. He patterned his crime-fighting persona after the heroes he admired most: The Samurai warriors of ancient Japan. Guided by the ancient Samurai code of honor, Samurai is a fine role model and member of the Super Friends in their global crusade against evil. 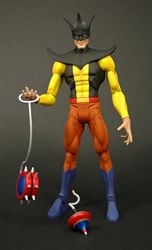 Winslow Schott is a shy inventor who was tricked into selling his toy company to an arms manufacturer. Realizing his technology was going into smart-bombs, Schott sent an explosive teddy bear to his new boss. This ironic murder marked the birth of the Toyman. A frequent adversary of Superman, Toyman is a twisted genius who lost touch with reality and sets out to punish anyone he feels deserves it. 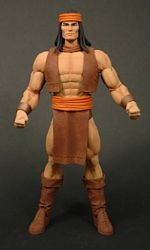 By speaking the word “Inyuk-chuk” (“Big Man”), Apache Chief could grow to vast sizes. He also spoke in stereotypical “Native American English” and recited vaguely Native American philosophy. In the 1978 episodes “Revenge on Gorilla City” and “The Time Trap” the 1984 short episode entitled “The Village of Lost Souls”, it was shown that Apache Chief also had a superhuman tracking ability.

Apache Chief’s origin, shown as a recording in the episode “History of Doom”, was thus: while still a young brave, he went for a walk with the chief of his tribe. The two men are quickly attacked by a bear, but the chief – recognizing that the young brave might be ready for a test such as this – gives the younger man a pouch of a special magic powder, which will amplify the user’s thoughts and abilities a hundredfold. The young man resolves to be strong and brave (heeding the chief’s advice that whatever is in his mind at the time, the dust will amplify), and upon sprinkling himself with the powder and invoking the magic phrase “Inyuk-chuk”, grows to fifty feet in size, stronger and braver. He disposes of the bear without violence, proving that he has passed the test. (Unfortunately, a passerby witnesses the entire affair and steals the dust, using it on herself – and becomes the evil Giganta: “Your fifty feet of good are now matched by my fifty feet of evil!”)

Apache Chief does not appear in the mainstream DC Comics Universe.