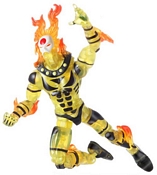 With his home country of Japan destroyed by the Horsemen of Apocalypse, Sunfire was captured and subjected to brutal experiments. At the hands of the Horseman, Death, his mutant powers were pushed to their absolute limit. By the time Death was finished with him, he was constantly on fire, his body eternally consuming itself in superheated flame. Rescued and recruited by the X-Men, he was fitted with a protective suit that shields him from the devastating effects of his own power. Driven by vengeance, he burns with the hope of one day avenging himself on those who destroyed his beloved homeland.