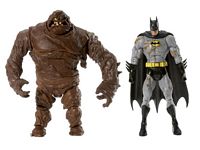 After witnessing the murder of his parents as a child, Bruce Wayne dedicated himself to protecting the lives of innocents. He took up the mantle of the bat to strike fear into the hearts of criminals. While he leads the life of a corporate executive by day, as night falls, Bruce becomes the Batman, leaping from the rooftops armed with an arsenal of gadgets on a crusade to protect the citizens of Gotham City.

(*I didn’t buy this one. I have the previously released Clayface and I’m not thrilled with the "Muddy" Batman.) 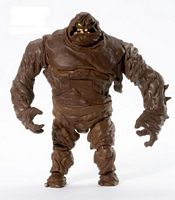 Initially an actor in horror films, Basil Karlo went mad when he learned a classic film of his was to be remade. He donned the mask of the film’s villain, Clayface, and killed several of the remakes cast and crew. Later, Karlo joined a collection of villains who used the name Clayface. Before the gang was defeated Karlo injected himself with the essences of several of his allies, becoming a superhuman with the abilities to change shape, melt others into protoplasm, and mimic the powers of heroes or villains.

(*I didn’t buy this one. I have the previously released Clayface and I’m not thrilled with the "Muddy" Batman.)