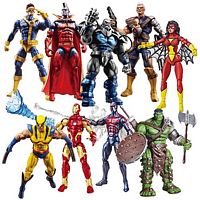 Born thousands of years ago, Apocalypse is the first mutant, and there is every likelihood that he will live to be the last. His natural powers are vast, and are enhanced by the alien technology he has spent millennia bringing under his control. No other villain has so shaped the course of the X-Men, as he has tested them again, and again to ensure that only the strongest survive.

Cable has been a soldier his entire life. For as long as he can remember, there has never been anything but his mission. With his powerful psychic abilities suppressed by a techno-organic virus, he devoted himself to perfecting his fighting skills. He has traveled across time, fighting wars in the blasted lands of an apocalyptic future, and battling alongside the X-Men in the present day.

When he was first taken in and made a member of the X-Men by Charles Xavier, Scott Summers didn’t understand that he was being turned into a soldier and a leader of men. For years, he has commanded various teams, and now he finds himself in the position of leader of an entire species. He wears the mantle of leadership uneasily, but those who have fought alongside him longest trust their safety and success to him.

The mighty Shi’ar Empire has many powerful servants, but the only one whose power makes the very earth beneath his feet tremble is the unstoppable Gladiator. Every victory renders him stronger; every enemy vanquished hardens him further against wounding and pain. Across the Empire and beyond, the name of Gladiator inspires awe and terror, for wherever a plot against the Shi’ar takes root, there Gladiator will be to destroy it. 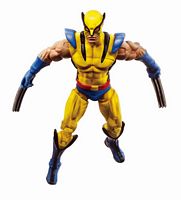 With the Hulk rampaging across the territories, the Canadian government sends in their ultimate weapon. Where the entire might of the US military has failed, it is hoped that the man known only as Wolverine can succeed. The Hulk may be bigger and stronger, but for the first time he is outmatched in sheer savagery, as the clawed hero fights him nearly to a standstill.