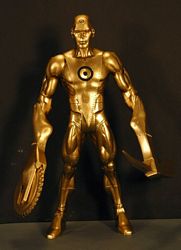 Gold is a member of the Metal Men, amazing automations invented by the brilliant roboticist Professor Will Magnus. Each Metal Man is equipped with Magnus´s most famous invention, the Responsometer, which gives each metal a highly individualized personality and allows them to change shape according to the properties of the metal they represent. Gold serves as field leader of the team, supervising their individual efforts when they’re in the field, or overseeing their combination into larger constructs. 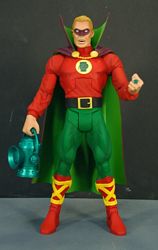 In 1940, railroad engineer Alan Scott came into possession of a green metal lantern created from a piece of the alien "Starheart." The lantern "spoke" to Scott, instructing him to use the lantern’s metal to fashion a ring, which allowed him to create objects and devices out of solid green light. Scott took his newfound powers and adopted the crime-fighting identity of Green Lantern, becoming a charter member of the Justice Society of America.

In the late 1930’s, chemist Rex Tyler developed the revolutionary vitamin "Miraclo" and decided to make himself the first test subject. The drug gave him increased strength, stamina, speed, agility and limited invulnerability, but only for an hour at a time. Rex decided to use these abilities to fight crime as Hourman, joining the Justice Society of America and the All-Star Squadron to help America through World War II and beyond. 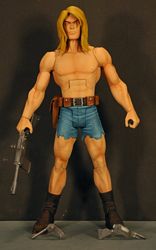 After a mysterious "Great Disaster" rendered the planet a post-apocalyptic wasteland, few humans remained, and the world fell under the tribal rule of mutated beast-men. Raised by his grandfather in the "Command D" bunker, an underground military installation, The Last Boy On Earth, set out to explore the outside world as Kamandi. Armed only with a pistol, he crossed paths with Great Caesar and his Tiger-Men, who ruled the east, as well as Czar Simian and his ape-men in the west, in his quest to restore humanity to a proud place in the world. 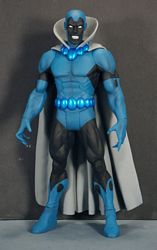 Todd Rice was in his teens before learning he’d been separated at birth from his twin sister, Jenny-Lynn Hayden. The children of Green Lantern, Alan Scott, and the super-criminal, Thorn, Jenny inherited their father’s powers of light while Todd developed shadow-powers from their villainous mother. Battling mental instability, Todd became a full-fledged villain, but eventually regretted the suffering he’d caused and pledged to make amends. Still, those closest to Todd worry that the "Obsidian" within him may one day consume him.

Tyr hails from Tyrraz, a planet-sized, mobile warship with a culture devoted to combat. His tactical cunning and great strength alone would make him a deadly adversary, but Tyr also replaced his right arm with a sentient mechanical appendage and blaster canon. His gun-arm not only delivers massive energy bursts, but it can also exert a form of mind control. In the event that Tyr is injured or unconscious, the arm can fight on its own, even detaching from his body to protect him or avoid capture.

Zatanna is the daughter of magician Giovanni "John" Zatara and Sindella, a sorceress of the mysterious Homo Magi. Like her parents, Zatanna is predisposed to magical powers, including elemental manipulation, transmutation, and teleportation. Her spells are spoken backwards, just as her father once did as an arcane adventurer. Zatanna first wielded her powers in an attempt to find and rescue her father from the evil witch Allura. In doing so, the young sorceress teamed with several heroes of the Justice League of America, eventually leading to her membership. 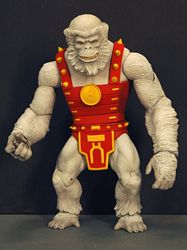 The Ultra-Humanite is the first supervillain faced by Superman. He was designed to be the polar opposite of Superman; while Superman is a hero with superhuman strength, Ultra-Humanite is a criminal mastermind who has a crippled body but a highly advanced intellect.

Superman first discovers the Ultra-Humanite as the mastermind behind a series of crimes with criminals wielding advanced technological weapons. After a series of battles with Superman, the Ultra-Humanite is presumed killed when his weapon explodes. Superman later encounters him alive in the body of actress Delores Winters. The villain explains that he kidnapped Winters and replaced her brain with his own. He attempts to use his new appearance to ransom a group of celebrities on the ship The Sea Serpent for $5,000,000, but Superman defeats him again.