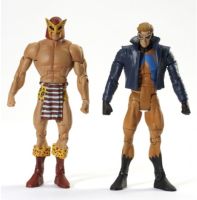 When a teenaged Buddy Baker went hunting in the Adirondacks, he found more than big game — He found an alien spacecraft! After being exposed to its strange radiation, Buddy found he could take on the powers and characteristics of any nearby animal — Down to regenerating severed limbs, like an earthworm. He ahs faced many surreal menaces, traveled through space, and seen his entire reality torn apart more than once. But he always remains plain old Buddy Baker, family man and occasional hero — An oasis of sanity in the stranger corners of the DC Universe.

While in Tanzania, Mike Maxwell found himself trapped in a cave high atop Mount Kilimanjaro. In his attempt to survive he drank the cave’s water — which, unknown to him, was infused with a strange elixir that increased his muscle mass, making him much stronger. When Maxwell doned an ancient helmet, he discovered he could command and communicate with animals as B’Wana Beast. Even stranger, he could merge any two animals together into a new, hybrid form called a Chimera. B’Wana became a fighter for animal rights as the jungle’s premier hero.