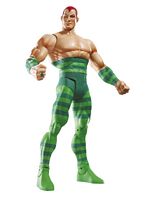 Amazo is a powerful Android capable of absorbing and mimicking the superpowers of the members of the Justice League of America. "Absorption Cells" allow Amazo the ability to duplicate the power of any Superhero he encounters but he is only able to use the powers of one Superhero at a time. 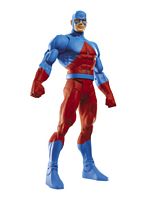 By manipulating the correct combination of elements, Ivy University physicist, Ray Palmer was able to shrink down to six inches… or even microscopic size, retaining all of the mass of his 180-pound, six-foot tall alter ego and pack a powerful punch at any size. With a costume fashioned to shrink and enlarge with him, Palmer became the Atom!

As a multiple Olympic gold medalist, Jefferson Pierce could easily have turned his fame into fortune. Instead, he chose to return to his old crime-ridden neighborhood as a High School teacher and Black Lightning, hero of the streets and protector of ordinary people threatened by criminals and their activities. 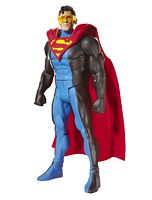 The Eradicator’s sole mission is to preserve Kryptonian culture above all others. After Superman’s death at the hands of Doomsday, the Eradicator’s programming allowed it to temporarily take Superman’s form and help bring him back to life. In addition to sharing the same superpowers as Superman, the Eradicator is able to manipulate all manner of energy, making him more than a match for even the Man of Steel! 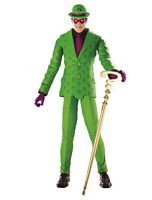 Edward Nigma turned his love of puzzles into a career by running a crooked carnival puzzle game. But E. Nigma, yearning for greater glory and wealth, decided to use his love of riddles to match wits with the Gotham City Police and Batman, sending them fiendishly complex clues to his forthcoming crimes, crimes committed as… the Riddler! 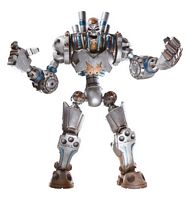 While fleeing from the scene of a crime, Corben suffered a near-fatal accident that mangled his body beyond repair. However, elderly scientist Professor Vale happened to come upon Corben, and used his scientific skill to transfer Corben’s brain into a robotic body covered by a flesh-like artificial skin. However, Corben discovered that his power source, a capsule of uranium, would only last a day, but was told by Vale that Kryptonite would provide him an indefinite power supply. After obtaining a job with the Daily Planet, Corben briefly tried to romance Lois Lane, while deciding that he’d use his powers to eliminate Superman, the one person who might expose his criminal deeds. After setting a Kryptonite death-trap for Superman, Corben stole what he thought was another sample of Kryptonite from a museum as a new power supply, not knowing it was in reality a fake prop; this mistake caused him to die. Superman eventually escaped from the Kryptonite trap.

Note: There were no variants in this wave.