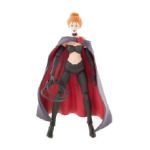 Its eternal matter coalesced into the mortal form of Jean Grey, the Phoenix found itself subject to the many weaknesses of mortals, not the least of which was the manipulation of a powerful psychic like Mastermind. Her consciousness swamped by the overwhelming psychic assault of her attacker, she left the X-Men, and joined the Hellfire Club as one of its most powerful members. With her mind opened wide to the darkest aspects of her personality, the Phoenix embraced evil wholeheartedly. Even when she inevitably slipped loose from the power of Mastermind, she simply plunged deeper into the darkness, emerging as the elemental force for universal destruction known as the Dark Phoenix.