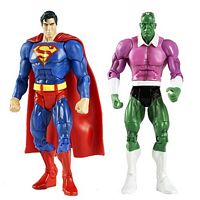 Vril Dox served as scientist prime for his technologically advanced home world of Colu. When he tried to take over the planet, he was punished by being disintegrated. His consciousness survived and adopted the identity of Brainiac, setting his sights on assimilating the knowledge and intelligence of all cultures in the universe, and then eradicating them. Brainiac has destroyed hundreds of worlds, including Superman’s home, Planet Krypton.

Rocketed to Earth from the doomed Planet Krypton, the infant Kal-El was adopted by the Kent family of Smallville, Kansas. Young Clark Kent grew strong and powerful under the rays of Earth’s yellow sun, developing extraordinary super powers. In adulthood, Clark used these abilities as Superman, championing Truth, Justice and the American way while keeping secret his true identity and acting as a reporter for a great metropolitan newspaper.

(*This version of Superman has Heat Ray vision red eyes.)