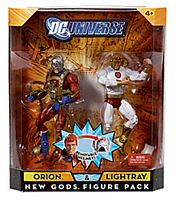 When Highfather and Darkseid, the leaders of New Genesis and Apokolips, agreed to a treaty, part of the pact directed the leaders to trade their sons. Orion, son of Darkseid, was therefore raised on New Genesis, the planet of light. Ultimately, he joined the Justice League of America and helped defeat his tyrannical father.

Lightray is the shining star of New Genesis and a high-spirited New God. He is cheerful and optimistic, preferring to solve problems through compromise rather than combat. He uses the speed of light to his advantage in eluding foes. As Solis, his idea of fun is protecting New Genesis from Apokolips, Darkseid and his minions.
Accessories: None