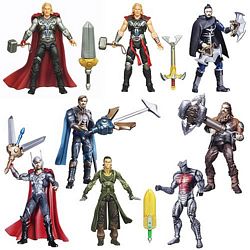 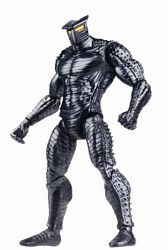 Forged by Odin and infused with his power, the Odin Force, this unstoppable weapon is locked deep beneath the palace in the Allfather’s Weapons Vault. Created to defeat the most terrifying threats in all the Nine Realms, no enemy has ever faced this guardian and won. Its sole master is the reigning King of Asgard, and so it waits for Odin’s next command. 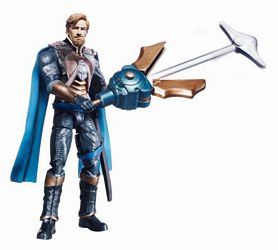 Fandral the Dashing is know as much for his skill with a blade as for his striking good looks. Many have swooned at his attention, but many more enemies of Asgard have fallen beneath his furious attack. There is no edge Fandral cannot turn into a weapon, and no clash that does not go exactly as he plans. 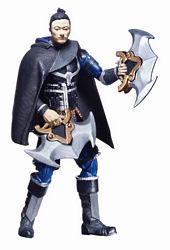 Hogun the Grim rarely smiles, and never laughs. He finds his own quiet joy in victory over the enemies of Asgard, but he leaves the celebration to Volstagg and Fandral. His skill at hand-to-hand fighting makes him an invaluable comrade in arms to the Mighty Thor.

Thor is the sworn protector of Asgard, and the heir to its throne. Together with his companions – a trio of mighty men known as the Warriors Three – Thor defends Asgard from its enemies. They have learned to fear the rumbling of thunder, for it always precedes a blow from the mighty hammer of Thor. 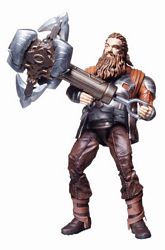 Volstagg the Valiant is famous across Asgard for his boundless bravery, mighty axe, and endless appetite. It is rare, even in battle, to find him without food in his hand, or at least a pouch full of snacks. His hunger never distracts him from a battle, however, and his brother warriors are always glad to have his axe at their sides. 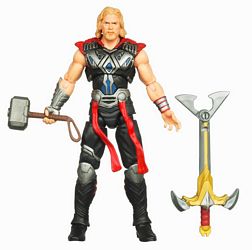 Thor is known across the cosmos as the mightiest warrior in all the Nine Realms. He has defended the divine kingdom of Asgard for a millennium from the darkest forces of the Marvel Universe. With his legendary hammer, Mjolnir, in his hand, he is an unstoppable force who commands both the lighting and the storms. 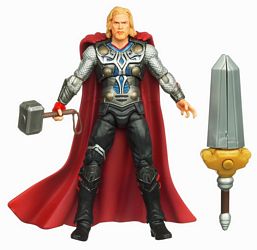 Thor is the master of nearly every weapon in Asgard’s arsenal. The dwarves created Thor’s Power Sword to allow him to channel his otherworldly abilities and defeat any foe that dares to cross his path. The unusual blade hums with divine might as THOR charges the internal spike with the power of his lightning. Though Loki is no coward, he prefers to test his wits against his enemies, rather than the strength of his arms. Coercion and mischief are his tools for victory. Other gods sneer at his avoidance of combat – an attitude they will learn to regret when they finally get a taste of his triple-bladed sword. 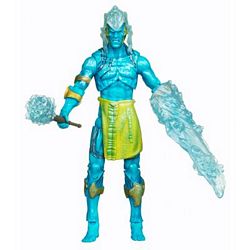 Since the beginning of time, the Frost Giants have struggled to break through the walls of Asgard. Although they have always been defeated by its king, Odin, they have never been destroyed. They now wait and plot their return when they will be strong enough to rise up again and finally destroy the golden realm and its king.