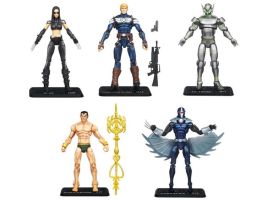 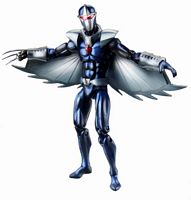 As a teenage boy, Chris Powell discovered an amulet that transferred his consciousness into the armored body of Darkhawk. Granted enhanced strength, flight and powerful energy blasts, Chris devoted his new abilities to the fight against evil. Though he is not invulnerable, any damage he suffers as Darkhawk is easily repaired in the transition back to his human form.

Namor the Sub-Mariner is a man of two worlds. The memory of the destruction of his homeland of Atlantis fuels his anger toward his enemies. He has strong ties to the X-Men, Avengers, and Fantastic Four, and assists them in the fight against evil. Today, the Sub-Mariner looks to gather the remainder of his people off the coast of San Francisco in hopes to rebuild Atlantis to its former glory.

Steve Rogers was changed into the perfect human specimen by the super soldier serum. He was the first to take on the identity of Captain America. Blessed with superhuman abilities and an indestructible shield, he protects the people of the world as the Director of S.H.I.E.L.D. and commander of the Secret Avengers.

Originally created by Hank Pym, Ultron became self-aware and rebelled, swearing to destroy all of humanity. With adamantium armor, superhuman strength and the power of hypnosis, he poses a great threat to the human race. Each time the Avengers think they have destroyed him for good, he finds a way to rebuild himself more powerful and dangerous than ever before.

X-23, the young clone of Wolverine, is one girl you don’t want to mess with. Created as a living weapon by the mysterious Facility, she has been rescued and adopted by the mutant protectors of Utopia. Despite her dark past, she has found a place with the X-Men and X-Force, serving as a powerful soldier in the defense of the mutant species.