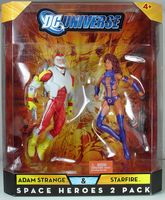 Archaeologist Adam Strange was transported to the distant planet of Rann by a random communications beam from outer space. Adam soon became the official hero of Rann, the planet’s protector against strange menaces of all kinds. Though without powers, frequently outnumbered and almost always out-gunned, Adam’s cleverness and innovation have allowed him to overcome every menace and gain a reputation as the "Thinking Man’s Hero."

To seal a peace pact, King Myand’r of Tamaran sold his daughter Koriand’r into slavery. Her imprisonment ended when scientist experimented on her and accidentally imbued her with the power to harness solar energy as a destructive force. Now an inhabitant of Earth, Koriand’r is known as Starfire and has become a member of the Teen Titans.