As a young boy, Bruce Wayne saw his parents fall victim to a senseless crime. His focused purpose became to avenge their deaths by fighting Gotham’s criminal elements as Batman. The people of Gotham City see Batman as an almost mythical figure, able to tame any adversary, no matter how powerful. To thwart crime, he relies on his awesome deductive powers, sheer physical speed and an assortment of high-tech weaponry and unique crime-fighting aids. 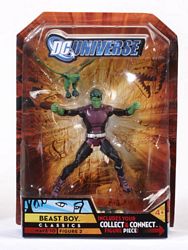 While traveling to Africa with his scientist parents, Garfield Logan fell victim to a deadly virus and was saved via an experimental treatment that turned his skin and hair green, in addition to granting him the ability to transform into any animal he imagined. After his parents died in a boating accident, Gar was taken in by the Doom Patrol, a team of misfit heroes that helped him to master his powers. 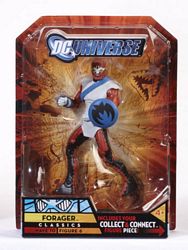 Forager was born among the "Bugs" beneath New Genesis – evolved humanoid insects scattered there as biological weapons years ago by the armies of New Genesis’ rival planet, Apokolips. Forager’s forays to steal food from the surface world ultimately brought him into contact with Orion and Lightray of New Genesis, and helped them prevent one of Darkseid’s most fearsome servants, Mantis, from exterminating all bugs. 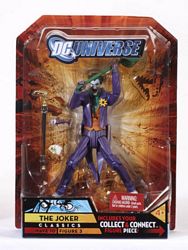 The Clown Prince of Crime is Batman’s deadliest and most unpredictable foe. Rumored to be a failed stand-up comedian turned petty criminal who fell into a vat of chemical waste while escaping from the scene of a crime – that incident turned his skin white and his hair green. Batman knows the Joker is certifiably insane, which makes the end result of his actions that much more deadly. 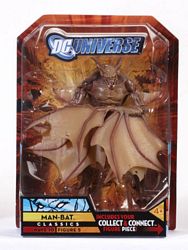 Dr. Robert Kirk Langstrom hoped to cure his growing deafness by creating a serum that would give him a bat’s ability of echolocation. However, the serum robbed him of his intellect and transformed him into a man-sized bat, resulting in a crazed rampage through Gotham City. Langstrom retooled his formula, allowing him to retain his intelligence and is an occasional ally of Batman. 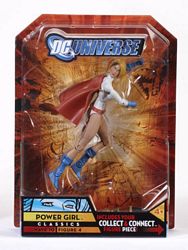 Believed to be the granddaughter of the ancient Atlantean mage Arion, Kara was sent thousands of years into the future to spare her from Arion’s evil half-brother, Garn Daanuth. Kara emerged from her time-spanning life-pod and was taken under the wing of Superman, who introduced her to the Justice Society of America, a team that helped Kara to master her own magically-created superpowers and adopt the guise of the heroine Power Girl. 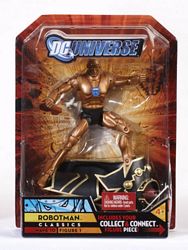 Once one of the greatest, and wealthiest, race car drivers in the world until a devastating racing accident destroyed his body. The mysterious Doctor Niles Caulder saved Cliff Steele by transplanting his brain into a ceramic metal body. Cliff eventually took the leader’s role in the Doom Patrol, Caulder’s team of "Super-misfits," alongside Negative Man and Elasti-Girl, battling strange menaces and protecting humanity.

When Mongul, the son of the deceased villain of the same name, arrived on Earth saying Imperiex had destroyed Warworld and was heading for Earth. He convinced Superman to help him fight Imperiex. However it transpired that the huge alien entity they had encountered was just a probe; Imperiex Prime himself was a much larger and more powerful being. He had detected imperfections in the fabric of the universe, and his ultimate plan was to destroy it and create a new, perfect one. To do so he headed for Earth, the planet which holds the Universe together, to start a new Big Bang from there.