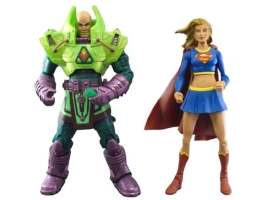 As a super-intelligent teenager, Lex Luthor idolized Superboy and saved him from a piece of Kryptonite. While working toward curing Superboy’s weakness, one of Luthor’s lab experiments went awry, causing Luthor’s hair to fall out while permanently damaging his psyche. Luthor blamed Superboy for the mishap and, as the two grew to adulthood, Luthor vowed to do everything in his power to destroy the Last Son of Krypton.

Superman’s cousin from the planet Krypton, Kara Zor-El arrived on Earth as a teenager. To protect her, Kara was secreted on Wonder Woman’s home island of Themyscira. Unfortunately, Supergirl was abducted by the villain Darkseid and pitted against Superman in a battle for her soul. Ultimately, Superman won out and returned to Earth with Kara, who now wears a costume inspired by her cousin as the young heroine – in training – Supergirl.