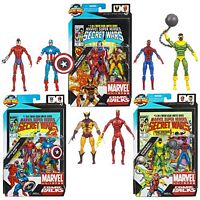 Earth’s most powerful protectors and its strongest villains find themselves trapped on a mysterious, patchwork world and commanded to fight by the mysterious voice of the all-powerful Beyonder. While Captain America takes command of the forces of good and prepares for an all-out war, the villain Klaw languishes imprisoned in the walls of the ship of mighty Galactus!

The battle begins in earnest as a massed force of villains attack the gathered heroes. Though the initial strike is devastating, Wolverine is more than happy to finally have a fight. He dives claws first into the vicious melee against his enemies. Meanwhile, the Human Torch soars through the sky, concentrating his flame blasts on the powerful weapons of his opponents, melting them into slag and rendering them defenseless against the clawed X-Man!

Fresh from their first victory over the villains, the heroes take refuge from a violent storm in their immense new base. While Thunderball lies locked in a stasis chamber, prisoner of the heroes, Spider-Man explores the base. Though many of the other heroes are eager to go back on the attack, all the web-slinger wants is to finish the fight and get back to Earth.