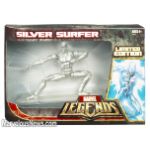 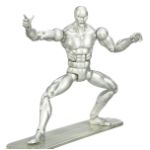 Among the greatest challenges ever faced by the Fantastic Four, the Silver Surfer looms largest. Taken from his home world of Zenn-La, his mind was erased by Galactus and his body infused with the "Power Cosmic," elemental energies on which the universe turns. He is one of the most powerful beings in existence. Despite his long service to Galactus, he overcame his brainwashing and found himself remembering a world full of life, and love. His memories in their power gave him the strength to defy mighty Galactus himself, and turned the Silver Surfer from a galactic threat into one of the greatest heroes the universe has ever known.

Note: This was a re-release of the Toy Biz Series Five Silver Surfer with a change to a non-magnetic surf board with two foot pegs.