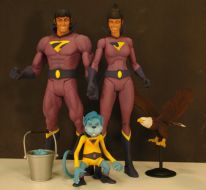 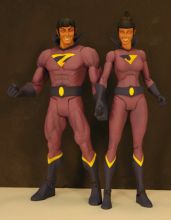 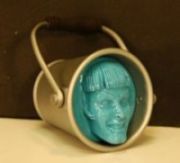 By touching knuckles with his sister and uttering the magic phrase "Wonder Twin Powers, Activate," Zan is able to transform into any water-based shape possible. Whether it’s liquid, vapor, or even a solid ice structure, he always calls upon the proper "form of water" for the situation. Limited only by his imagination, his constructs go beyond simple bridges and shelters. If there is ever the need for a functioning jet made of ice – Zan is the man!

Combined with the powers of her twin brother, Jayna is able to turn into virtually any beast on Earth or beyond – from a mythological Griffin to an extinct dinosaur or even a creature from a distant planet. Jayna often assumes the "form of an eagle" to deliver urgent news or to cover great distances quickly. And if a ring-tailed Lemur is the key to keeping evil at bay, Jayna is your mammal!

This set came with an eagle and a bucket of water with Zan’s face. The box included lights and sounds and opened to showcase both figures in the box. Gleek the Monkey was a "convention only" gift that came poly-bagged and was given out at the time of purchase.