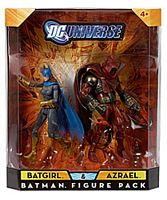 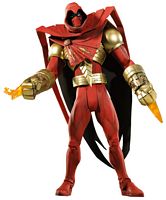 College student Jean-Paul Valley had no idea that he was destined to follow in his father’s footsteps and become an elite enforcer/assassin. Trained since birth by “The Sacred Oder of Saint Dumas” to be Azrael, Angel of Vengeance. When the order sent Azrael to kill a weapons dealer, his plans were thwarted by Batman. But Batman’s example proved an inspiration to Azrael, who turned against his masters in the order and became their sworn enemy.

(*I didn’t buy this two-pack, since I already had both figures from the DC Superheroes line.)

As the adopted daughter of Gotham City’s police commissioner, Barbara Gordon was raised in a household filled with cops and their stories. Barbara wanted nothing more than to follow in her father’s footsteps, but the elder Gordon refused to allow it. As a jibe against her father, Barbara wore a “Batgirl” costume to a masquerade ball and wound up saving billionaire Bruce Wayne from a kidnapping attempt. Deciding that this was how she could serve the cause of justice. Barbara Gordon elected to keep her new costumed identity.

(*I didn’t buy this two-pack, since I already had both figures from the DC Superheroes line.)