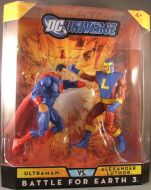 Alexander Luthor was an acclaimed scientist on his home world of Earth-3, one of the many "alternate universes" where history often played out in opposite versions of the Earth we know. When two of his counterparts from Earth 1 and 2 set their sights on conquering his earth, Alexander enlisted the aid of the evil Luthors’ respective archenemies, the Supermen of their world, to come to and help fend off the attack. In response, the evil Luthors’ partnered with Earth-3’s twisted version of Superman, the evil Ultraman, to back their cause.

Born on the planet Krypton of an alternate universe where good and evil are reversed, Ultraman quickly became the most powerful super-criminal on that planet. A mirror-image of Superman, Ultraman had all of the powers and abilities of Kal-El, only with the desire to use them for evil. He joined with other super-criminals to form the Crime Syndicate of America, the evil opposite force of the Justice League. Ultraman’s primary opposition came from Alexander Luthor, Sr., a genius scientist devoted to bettering humanity through his inventions.