The last Avengers figure for the Marvel Select movie line was revealed at last weekend’s C2E2. It is interesting to see a more detailed image of what the villains from the upcoming Marvel Avenger’s movie will look like especially, after all the secrecy and speculation about whether they would be Skrulls or not. OK; so they obviously aren’t Skrulls, so the question still remains, what are they? This Marvel Select figure looks pretty awesome and it really makes my anticipation for seeing this movie spike. I will be there on May 4th to see The Avenger’s, will you? Here’s the official release from Diamond Select Toys about the Marvel Select Loki’s Army Figure, a new image of the Marvel Select Avenger’s Hawkeye with his base and Marvel Minimates Series 45. The Avengers, oh yeah! 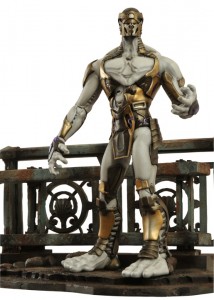 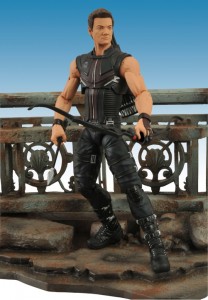 If you were lucky enough to be at the Chicaco Comic and Entertainment Expo (C2E2) this past weekend, you were treated to a major unveiling! The final figures in Diamond Select Toys’ Avengers toy lines were finally shown to the public, providing a detailed look at Loki’s Army from the highly anticipated film!

As part of Marvel Minimates Series 45, a 2-inch minifigure of Loki’s Army Footsoldier will come out in early May as part of a two-pack with Maria Hill. And be on the lookout for a rare variant set, which will pair the Footsoldier with his even more intimidating General! Then, in July, look for the 7-inch Marvel Select figure of the Footsoldier to hit stores, along with a bridge battle display base that connects to Hawkeye’s display base, forming a larger battle scene! These Loki’s Army Minimates and Marvel Selects are only available in comic shops and specialty stores, so visit comicshoplocator.com to find the nearest location, or go to your favorite online retailer!