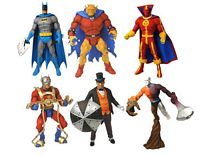 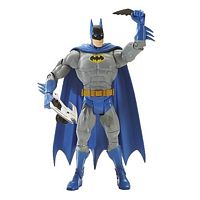 After witnessing the murder of his parents as a child, Bruce Wayne dedicated his life and fortune to protecting the lives of the innocent while striking fear into the hearts of criminals. Armed with an arsenal of gadgets, Batman patrols the shadows of Gotham City keeping the streets safe from crime. 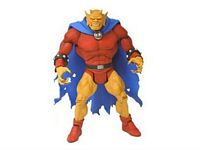 Originally summoned from the pits of Hell by the wizard Merlin to defend Camelot from the witch, Morgana Le Fey, Etrigan in recent years has become a monster possessed by the soul of his human host Jason Blood. He can transform between his Demon and Human forms only if a special incantation is read. Although adept at magic and sorcery, the demon, Etrigan prefers to blast his opponents to cinders with his fire breath. 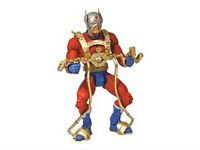 Born the son of the tyrannical Darkseid, lord of the planet Apokolips, Orion was adopted by the kind ruler Highfather and raised on the neighboring planet New Genesis as part of a truce between the two worlds. Orion’s feral nature made him the fiercest fighter of all the new gods and ultimately helped him defeat Darkseid’s plans to control the universe. 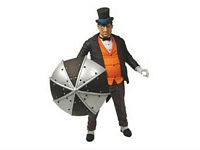 A murderous gangster, Oswald Cobblepot grew up fascinated with birds, in part because his widowed mother ran an exotic bird shop. Nicknamed "The Penguin" by his cruel classmates, the villain would ultimately take his revenge on the citizens of Gotham City, earning him the attention of the Dynamic Duo, Batman and Robin. He is both devious and ruthless, usually flying from the scene of his crimes. 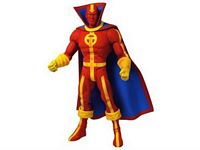 Red Tornado came into being when a living cyclone, originally called Tornado Tyrant from the planet Rann, was fused to an android body by the scientist T.O. Morrow. Although he was originally created to destroy the Justice League of America, Red Tornado instead disobeyed his programming and defeated his master, thus earning the android membership in a grateful and forgiving JLA. 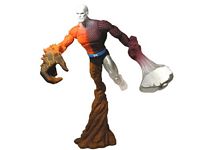 The Element Man
a.k.a. Metamorpho

Rex Mason was an adventurer who was hired by business tycoon Simon Stagg to retrieve a rare Egyptian artifact. In an Egyptian pyramid, Rex Mason was exposed to a radioactive meteorite called the Orb of Ra which transformed him into the Element Man. He became able to shape-shift and change himself into any element found in the human body, or any combinations thereof. It was later revealed that Mason was but one of many metamorphae, created by the sun god Ra to serve as warriors in his battle against the god Apep, "the serpent who never dies".

*Information not listed on the card. Taken from the Wikipedia. 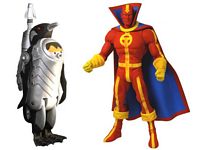 *Note: The variants for Wave One have currently never been released. There was to be a modern version of Red Tornado and the Penguin was to have a Robotic Penguin pack-in.
Release Date: January 2008