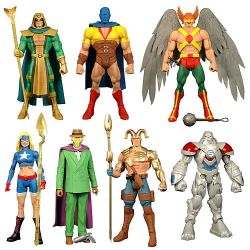 Al Pratt was an unlikely choice for a boxer, much less a costumed crime fighter; however, the "98 pound weakling" and college student became an American hero. Devoid of super powers, Pratt nevertheless fought crime as The Atom and was a founding member of the Justice Society of America and All-Star Squadron. It wasn’t until he was exposed to radioactive elements that Pratt became a bona fide super-powered hero.

During ancient Egypt’s 15th dynasty, Prince Khufu and his beloved Princess Chay-Ara discovered a downed spacecraft from the planet Thanagar. Exposure to the ship’s anti-gravity Nth Metal allowed Khufu and Chay-Ara to be reincarnated countless times throughout the ages to follow. In modern times, Khufu became the hero Hawkman, Chay-Ara reincarnated as his beloved Hawkgirl.

Lance Corporal David Reid already had the distinction of being a U.S. Marine and the great-grandson of Franklin D. Roosevelt before he touched the stone fragment that gave him plasma energy powers. While investigating the resurgence of the old god Gog, he was tragically killed by a military attack. Resurrected by Gog, given new powers and the name Magog, he became a devoted disciple. However, Magog eventually saw the evil in his master and heroically helped to destroy it.

As an infant, Lord Naga and his conjoined twin were taken from their parents by the Cobra Cult of India. The cultists separated the twins and raised Lord Naga to be a brilliant and vicious international terrorist, with hopes that he would lead them through the Kali Yuga – the time of great chaos. He may not have super powers, but with his devious intelligence and ability to manipulate thousands, Lord Naga is one of the most dangerous villains ever to exist. 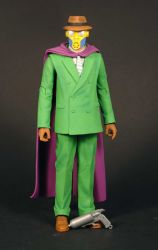 The wealthy Wesley Dodds spent much of his youth in the Far East where he learned martial arts and the wisdom of the ancients. In adulthood, Wesley was tortured by prophetic dreams that inspired him to create a gas mask, gas gun, and costume. As the Sandman, he used his skills and social connections to fight crime, eventually becoming a founding member of the Justice Society of America and serving with the All-Star Squadron.

Courtney Whitmore was a happy, All-American girl when her mother married Pat Dugan (formerly the hero Stripesy) and abruptly moved the family to Nebraska. Irritated by her new stepfather, Courtney found the Star Spangled Kid’s Cosmic Convertor Belt and decided to do some adventuring of her own. Dugan responded in kind by developing a robotic suit and accompanying her as S.T.R.I.P.E. Ultimately, Whitmore thrived in her new identity, becoming a principle member of the new JSA. 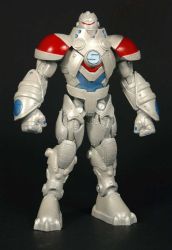 S.T.R.I.P.E. (Special Tactics Robotic Integrated Power Enhancer) is a powered armor suit invented and worn by Patrick “Pat” Dugan, the former adult sidekick to teenage superhero Sylvester Pemberton, the Star-Spangled Kid. “Stripesy”, as he is often called, is a gifted mechanic who built the Star Rocket Racer, a bubble-topped limousine with the functions of a rocket and helicopter. Together, they were members of the Seven Soldiers of Victory and the All-Star Squadron.

Pat worked with the Justice Society of America for a short time, mostly in a supporting role. He retooled one of Ted Knight’s old designs and created the Steel Eagle, a new aircraft for the team. He also completely re-engineered S.T.R.I.P.E., changing its entire appearance.

Later, Pat and his family were almost slain by The Fourth Reich, a Nazi organization who tried to wipe out heroic legacies. Right before this, Pat was encouraging his son, Mike, not to create S.T.R.I.P.E. parts in shop class. Pat and his family were saved by the Justice Society. Later, Pat hosted Courtney’s birthday party at his house, inviting the whole Justice Society.

A while later, when Courtney was missing, Pat offered to Power Girl that he could get S.T.R.I.P.E. out and help find her, to which Power Girl stated was not necessary