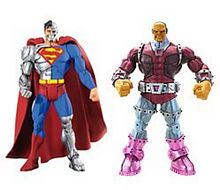 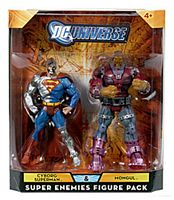 Hank Henshaw was exposed to cosmic radiation when his space shuttle crashed. Over time his body started to rapidly deteriorate. As his physical body expired, he was able to transfer his consciousness into a computer mainframe and mentally travel through space. Arriving on a distant planet, he recruited Mongul as part of a plan for revenge against Superman.

A ruthless conqueror who roams the universe in his planet-sized Warworld. For amusement, Mongul stages gladiator games with slaves that inhabit his world. After capturing Superman and forcing him into the gladiator pits, Superman refused to finish off his opponent. Mongul himself then decided to put an end to Superman but was defeated. Late Mongul joined forces with Cyborg Superman to seek revenge on the Man of Steel.