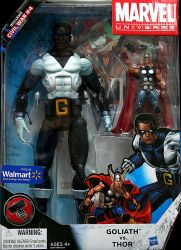 As an abandoned chemical plant burns around them, the first true battle of the Super Hero Civil War rages. This is more than a chance to stop the anti-Registration forces, however; it is a test run for the secret weapon developed by Tony Stark, Hank Pym and Reed Richards. A cybernetic clone of the mighty Thor thunders into the midst of the battle, his lightning striking down at his foes. As the powerful being smashes into the melee with his hammer, Goliath moves through the surging battle, hoping to stop the carnage before it goes too far. 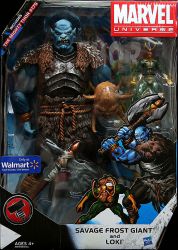 Adopted son of the king of Asgard, Loki was supposed to have been raised in ignorance of his giant heritage. In reality, the trickster was trapped by his nature. His compulsion to lie forced him to constantly engineer conflicts between the gods of Asgard and the giants of Jotunheim. Again and again, he plotted the destruction of his adopted home at the hands of the giants. Again and again, those plots fell apart under the hammer blows of his hated brother Thor. Still, Loki plots, and works in secret with the giants to see the gods laid low, and the crown of Asgard upon his brow.