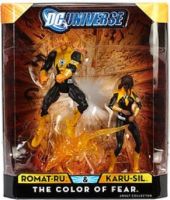 As a young girl on the primitive, violent jungle world of Graxos III, Karu-sil was orphaned during an attack on her village. Alone and left to fend for herself, she was adopted by a pack of predatory animals. In order to resemble her new family, Karu-sil cut off her lips to expose her fanged teeth. Years later, she came across a boy from a nearby village whom she promptly slaughtered to feed her pack. Witnessing the carnage and believing the girl to be in peril, Green Lantern Blish killed the predators and whisked Karu-sil to Glaxos IV to be cared for. After murdering one of her caretakers, she was recruited by the Sinestro Corps.

Not much is known of Romat-Ru other than he is one of the most prolific and vile serial killers in the galaxy. While under investigation for a minor infraction, Xudarian police were dispatched to search his home where they made a gastly discovery. Inside, they found the bones of thousands of children. While being transported to prison, a yellow power ring appeared and he was inducted into the Sinestro Corps.