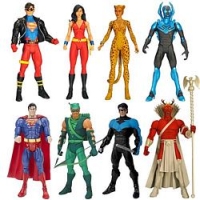 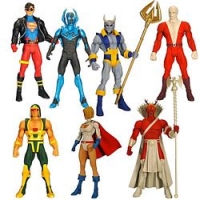 When the Rock of Eternity exploded, the alien scarab encased within it fell to Texas and bonded to Jaime Reyes’ spine, making him the 3rd Blue Beetle. Jaime found that with a mere thought, he could use it to generate armor, tools, and weaponry. He also learned the scarab was an advance agent for an expansionist alien species, that had bonded with Jaime. Together they beat back the alien attacks and Jaime’s heroic efforts earned him a spot in the Teen titans. 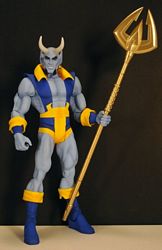 While working on an action film near ancient ruins, Daniel Cassidy was fused to his Blue Devil costume by an archdemon named Nebiros. Danny made the best of it and became a crime fighter. Then a deal with the demon Neron went sour and Cassidy was killed, only to be ressurrected as an actual devil. Danny usses his abilities to rid the world of supernatural threats with the super-powered team Shadowpact.

Several individuals have taken the name of Cheetah over the years. The first was a socialite named Priscilla Rich who resented the fame of the Wonder Woman of the 1940’s. Turning a cheetah-skinned rug into a costume, she tangled with the amazon several times. Decades later, glory-hunting archaeologist Barbara Minerva stumbled across an African tribe in the midst of a bloody ritual. She forced them to make her a part of the ceremony so she could become the vessel for the Cheetah spirit, attaining the abilities and feral nature of one of Wonder Woman’s greatest, most enduring foes. 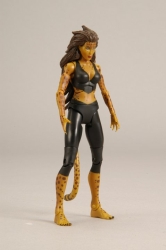 Several individuals have taken the name of Cheetah over the years. The first was a socialite named Priscilla Rich who resented the fame of the Wonder Woman of the 1940’s. Turning a cheetah-skinned rug into a costume, she tangled with the amazon several times. Decades later, glory-hunting archaeologist Barbara Minerva stumbled across an African tribe in the midst of a bloody ritual. She forced them to make her a part of the ceremony so she could become the vessel for the Cheetah spirit, attaining the abilities and feral nature of one of Wonder Woman’s greatest, most enduring foes. 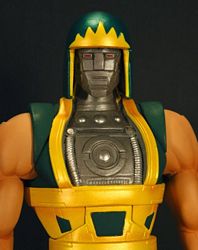 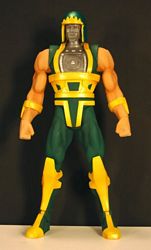 Superman programmed Cyclotron with complete knowledge of the strengths and weaknesses of every hero and villain. Superman hoped that Cyclotron would become the ultimate tactician, able to anticipate the moves of villains based on their prior tendencies and recognize heroes unfamilar to League members. The android could disguise himself as human and, although he had limited physical abilities, he could rotate his torso and deliver a powerful "Twister Punch."

Larry Trainor’s career as a test pilot ended tragically when he flew through a radiation field. The accident caused his body to emit deadly radiation that can only be contained by shielded bandages as well as the ability to release from his body a negatively charged phantom. Trainor became a founding member of the Doom Patrol with other heroes who gained their powers from tragic accidents.

Superboy is a clone created by Project Cadmus to replace the Man of Steel, believed killed in a battle with Doomsday. Unable to genetically engineer Kryptonian DNA, Cadmus instead bioengineered the Teen of Steel with genetic material from its late director, Paul Westfield. The young hero tends to think with his fists rather than his head, but tries to make Superman proud of him.

Originally created as a magical reflection of Princess Diana of Themyscira, Donna Troy became more than Wonder Woman’s identical twin "sister" when she was kidnapped and forced to endure a series of alternate lives ending in tragedy. Upon her returning to Earth – sans any memories of the experience – Donna adopted the guise of Wonder Girl and joined the first Teen Titans.

A sadistic, cruel and powerful demon of interdimensional origin, Trigon is result of the mating between a female member of a mystic sect and the god they worshiped. A side effect of this pairing, is that their child was filled with the cast-off evil energies of the inhabitants of Azarath, forming him into their personification. At birth, Trigon killed everyone around him (including his own mother). At the age of six, he destroyed an entire planet. And by the age of thirty, he held dominion over millions of worlds in his dimension. Arella, Raven’s mother, was a depressed woman who decided to join a Satanic cult known as Church of Blood, that was trying to kill Trigon. When the ritual was performed, Trigon, disguised as a handsome male, emerged and married Arella, who, soon impregnated by Trigon, discovered Trigon’s true nature. Trigon leaves Arella, who on the brink of suicide is found by an extra-dimensional cult and brought her to Azarath, where she gives birth to a daughter, Raven. Raven is brought up to “control her emotions” in order to suppress and control the demonic powers she inherited from Trigon.

Raven learned of Trigon’s intentions to conquer the Earth, and vowed to stop him; she initially approached the Justice League, but they refused her on the advice of Zatanna who sensed her demonic parentage. In desperation, she reformed the Teen Titans with several new members in order to fight her father. The team was eventually able to defeat Trigon and seal him in an interdimensional prison. However, Raven still had to fight her father’s influence, as he was not completely destroyed. Trigon eventually escaped and came to Earth, taking control of Raven and destroying Azarath in the process. The Titans came together and tried to fight Trigon, but were contaminated by his demonic influence and killed Raven; this allowed the souls of Azarath to possess her and use her as a channel to kill Trigon- the demonic possession had been part of a plan to defeat Trigon, as the Titans would never have killed Raven on their own-, blasting him out of existence with a beam of purifying light. Although Trigon is gone, his followers (led by Brother Blood) have tried to revive him several times.