They are finally here! It really feels great to have some new Marvel Legends both to hunt and to have in hand. These are the winner’s from last years Fan’s Choice Poll and they are exclusive to Toys ‘R Us. I’m pretty happy with each of these new figures, or maybe I’m just happy to have new Marvel Legends, it’s hard to decide. I think that some of Hasbro’s recent offerings have really improved over what we were getting when they took over after Toy Biz and I think that you will agree that these latest two-packs have also improved as well. There are paint applications and shading, there is more attention to detail, and no loss of articulation. One negative, that I am pretty disappointed in, is the price increase. $29.99 is a bit harder to swallow than the $20.00 we were paying. Luckily though, there are no army-builder’s in this series, so most of us will only have to buy one of each this time. I still haven’t found the regular versions of Deadpool and Warpath or the Black Widow and Winter Soldier two-packs yet, so I will have to write about those later. 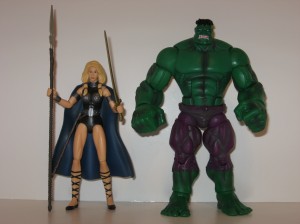 Let’s start with the Hulk and Valkyrie two-pack. This is probably my least favorite of the three I have been able to find so far. First The Hulk, yes we have been given yet another version of the Hulk, yet again. This one has a more artist specific head-sculpt which resembles Ed McGuinness’ style of art. If you already have the Red Hulk Build a Figure from Wave Four then you will be very familiar with this new Hulk. It is the same figure, molded in green plastic instead of red, with a new head sculpt. Don’t get me wrong, this is a very nice Hulk figure. I just would have rather seen his spot go for an all new figure that we don’t already have, like Constrictor instead. They did some shading around the muscles which is a nice touch and certainly helps to add some dimension and character. I think I would have preferred the shading done with a bit lighter hand though. They also painted the finger nails and toe nails which also gives him a little more eye appeal. Although this new Hulk is growing on me, I doubt he will replace my “Face-Off” Hulk anytime soon.

Valkyrie is from a prototype which Hasbro showed long ago. She was to initially be released as part of the Hulk / Fin Fang Foom Wave, and now she has finally been made. The details on the sculpt are pretty nicely done but she is a bit lacking in the paint and shading department. Her face is very plain and pale much like Emma Frost’s and some people are getting some really bad paint job’s on the eyes, so be careful. I didn’t notice when I picked between the two that were available for me to choose from, that her hair has a chunk torn out of it. I suppose this must have stuck when it released from the mold or she must have had an air bubble problem. I really would have liked for her scabbard to have been open so she was able to sheath her sword. Both the sword and spear could also have used a touch of paint as well. She does have El-Bro’s and Knee-Bro’s, but I think that they work pretty well for her and help to make the arms and legs look a little more natural. She can still do some pretty decent action poses too. I think she is going to look pretty good standing with my Defender’s and I really hope we get more members of that team eventually. 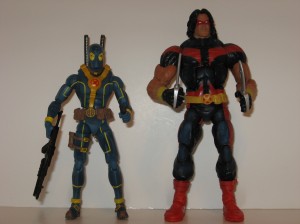 The Deadpool variant is of his blue and yellow X-Men costume. I’m not familiar with this costume or the story-line that he wore it in. Honestly, I wanted this two-pack more for the Warpath variant. I have the Toy Biz Deadpool and I think he will always have a spot in my display, but I would have rather had the red and black Deadpool, than this blue costumed one. I would have probably passed on this two-pack all together if it had been X-Men Deadpool and X-Force Warpath together instead. He comes with two swords, a hand gun which fits into a thigh holster, and an assault rifle. One major flaw with this figure is that his hands cannot hold the swords he came with. If you are going to give a figure a weapon, please make sure they can hold it. If they would have made new swords with a little larger hilt this might have solved the problem, instead they re-used the Hand Ninja swords that most of us already have a large number of in storage. They also re-used both the hand gun and the assault rifle from the Fury/SHIELD two-packs. The paint job on mine is pretty well done, and the shading is light enough to blend in better. I think that I have to agree with most Fwoosher’s though, that his head is a bit too big. I do really like the details that they put into the head sculpt though. The excess mask that flips down in the back was a very nice touch. You are going to recognize the body used for him too, because they have used it many times already. Quicksilver, Union Jack, Black Costume Spider-Man, Yellowjacket, Nova, Kree Soldier, and Guardian just to name a few. In all this blue costumed version is a nice variation of a very popular character.

Warpath is one huge figure! I really like this one. Really the only thing I don’t like about it is the way they kept the cuts on the forearms from the Crossbones body sculpt. That means the only wrist articulation we get is with turning the forearm cut which is not very good for a knife-wielding character and really breaks up the sculpt on a character with bare forearms. Boo, I say! I am glad that they sculpted a harness for his knives on the back of his belt though, that was a nice touch. I like the meaner looking face sculpt too. Is this costume his classic look, no. But, it is very close to his costume before his black and silver X-Force one. They added some straps to the top of his boots. The knives even have a little paint detail. I like him and I don’t really think he is too big. I’m glad to have a Warpath to add to my X-Men display and I hope someday we get his brother Thunderbird too.

Black Widow in her gray costume is also a really nice figure and I can’t wait to get a hold of the regular version. What can I say, I’m a fan of well endowed female action figures and this one certainly fits the bill! I actually really like the short-haired version of the two heads. I will probably display the gray costumed Widow with the short hair and the black costumed one with the long-haired head. This is a re-use of the Sharon Carter and Maria Hill body sculpt from the SHIELD two-packs with a new upper and lower torso. I’m not sure still how I feel about the belly button sculpted into the torso. The widow symbols on the front and back have really well done paint applications on mine and the darker airbrushing gives her some nice highlights on her costume. It would have been cool to have included a removable pleather jacket for her too. She also comes with a pistol and an assault rifle. This is probably my most favorite figure of these three two-packs. I unfortunately, scratched the paint on her chest a bit when I took her out of the package. Arrr!!!

The Winter Soldier variant is a re-use of the Ultimate Nick Fury figure without the overcoat and added a new vest piece and new arms. He comes with a short and long-haired head, a pistol, and an assault rifle. This is really a good representation of the character and is almost spot on from the comic books. My only complaint with this figure is that his cybernetic arm has a closed fist, instead of an open hand. This means he can’t hold but one gun at a time and can’t use both hands on his rifle. That is a pretty serious flaw for a gun-toting villain turned hero. Once again he has some airbrushed shadowing which is almost overdone on the human arm and legs. In fact the human arm is more black than blue on mine. The variant version has a red Communist Star painted on his cybernetic arm so I’ll be using the long-haired head with this one.

In all, I am very happy with these three two-packs. As collectors, we can always find some things to pick about but these are all pretty nice looking figures. I hope the price increase doesn’t stick and that it is just Toys ‘R Us bumping them up for the holiday season though. Now all we have to do is wait another year for the relaunch in 2012. That might just be hard to do. I’m already wanting more now! I’ll put together another post and pictures about the other two regular two-packs as soon as I find them. Good hunting and let me know what you think in the comments below! 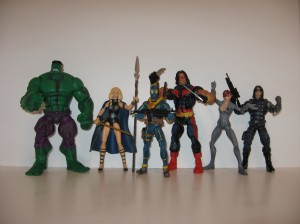